A GAME OF THRONES SEQUEL

This series is currently in progress.

Check back often for new scenes as I complete them!

After the ascension of Bran Stark to the throne, Arya was ready for a new adventure.

She knew she wanted to go where none had returned before: west of Westeros.

Arya sailed for many weeks beyond the Sunset Sea and the Westernmost Islands.

Pirates, plague, and starvation decimated her crew, until there were almost none left but her.

Until at long last they came upon a new and exotic land...

With a just a few crew members surviving, Arya spots land and is overjoyed.

In the distance, they see lush jungle growing to the beach, surrounded by turquoise waters.

Two canoes are coming out to meet their ship.

To Arya's surprise, the canoes contain desperate women and children, along with some wounded men.

Their skin is brown and their hair black and they look like no other peoples she had seen before.

On the shore, she sees long-haired warriors preparing a canoe to pursue the refugees, and she knows what she must do.

Before they can launch their canoes, she comes ashore and they look at her in astonishment.

She draws Needle and its new twin blade and tells them to go no further.

Getting over their initial shock, they laugh at her and spit at her feet.

Arya saw six more men melt from the trees, making it eighteen warriors in all.

She eyed their weapons, strange flat maces with sharpened obsidian blades on the edges.

Not bad odds, she thought to herself.

Her blades whirling, the men began to scream as she slew them one by one, their dark blood seeping into the sands of the beach.

They withdrew into the trees and she gamely followed them.

Slide the bar down to remove Arya's pirate outfit (if you don't see the slider module, just refresh the page). Join as a member to see the uncensored version. 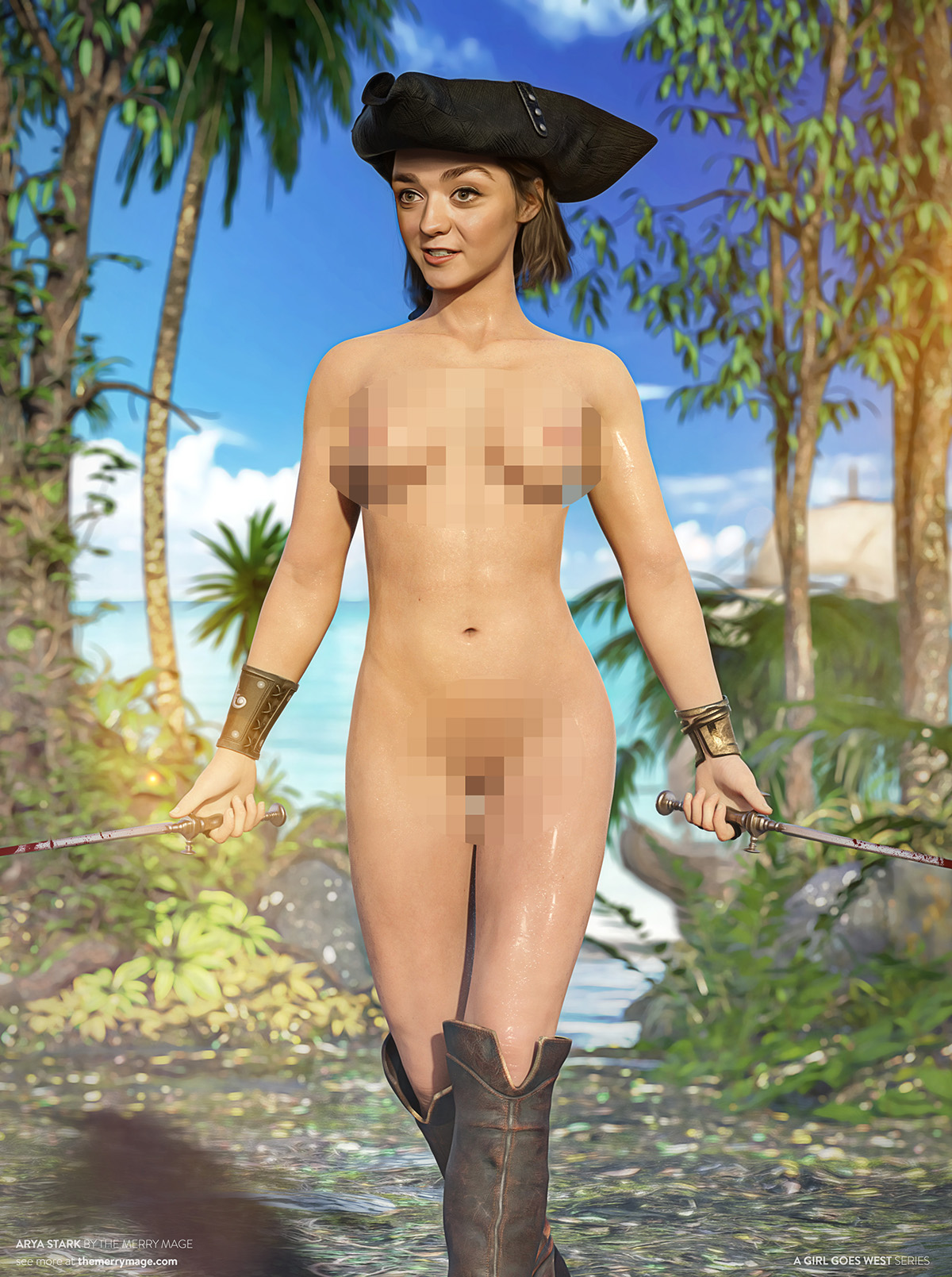 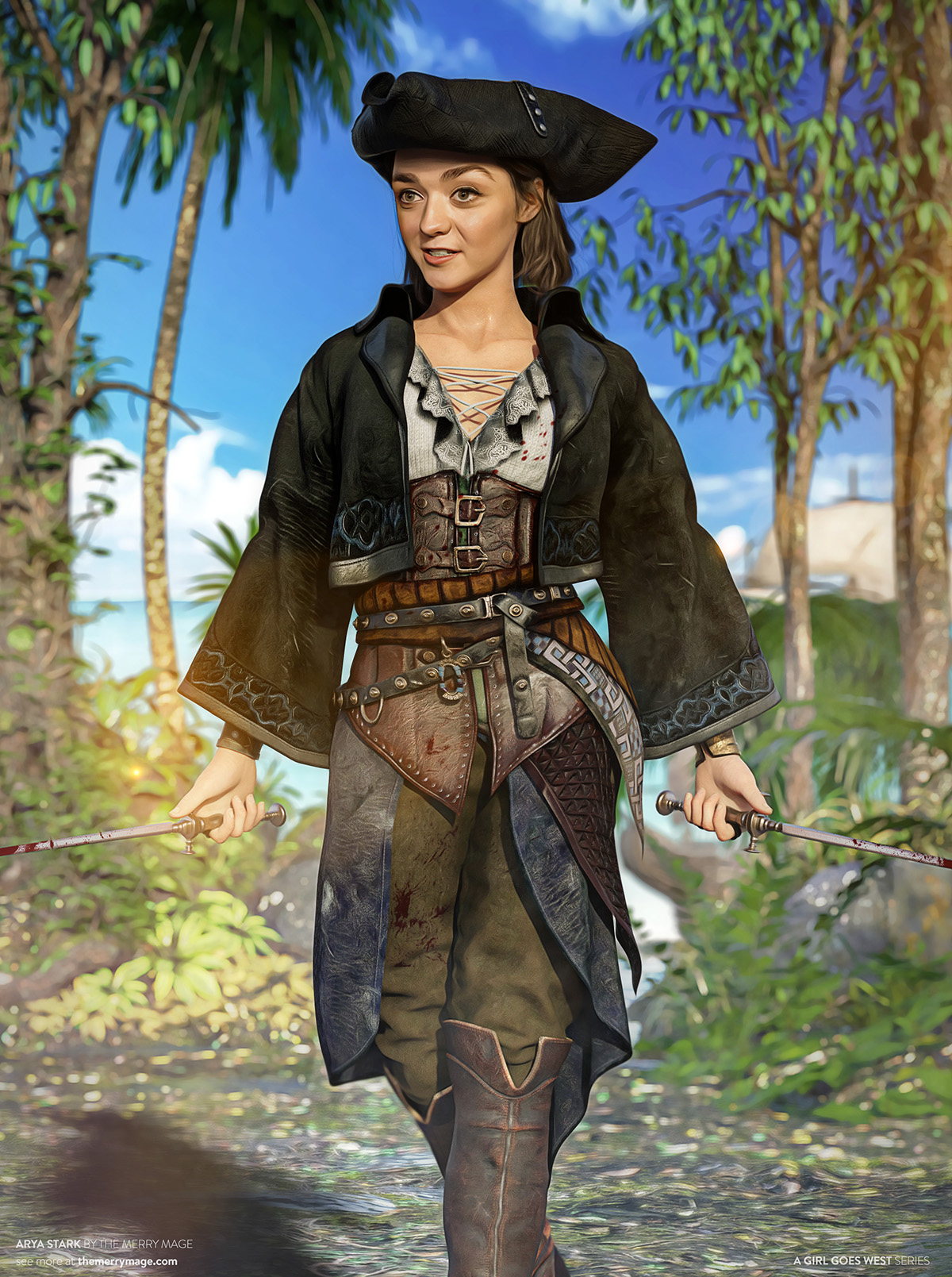 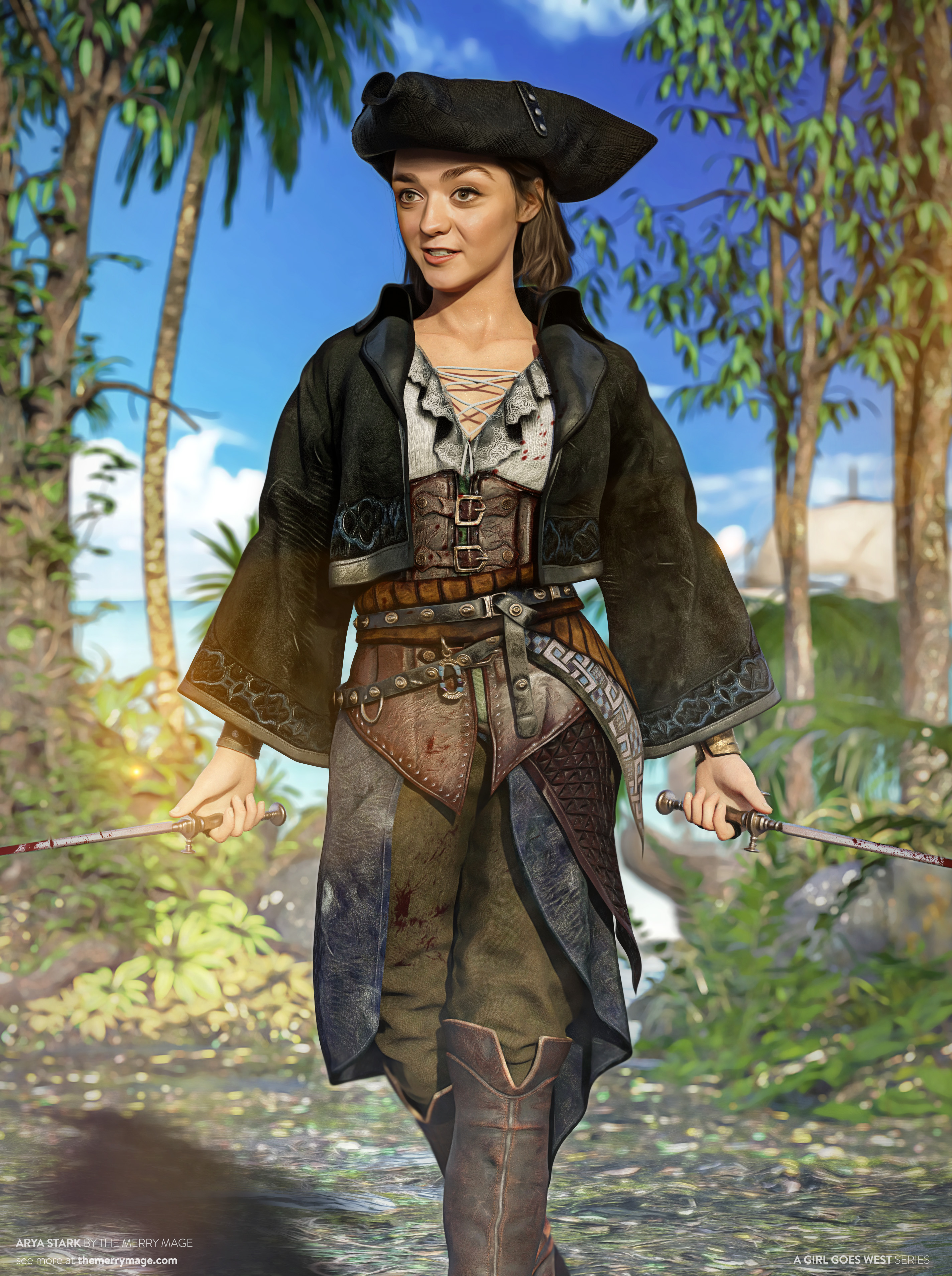 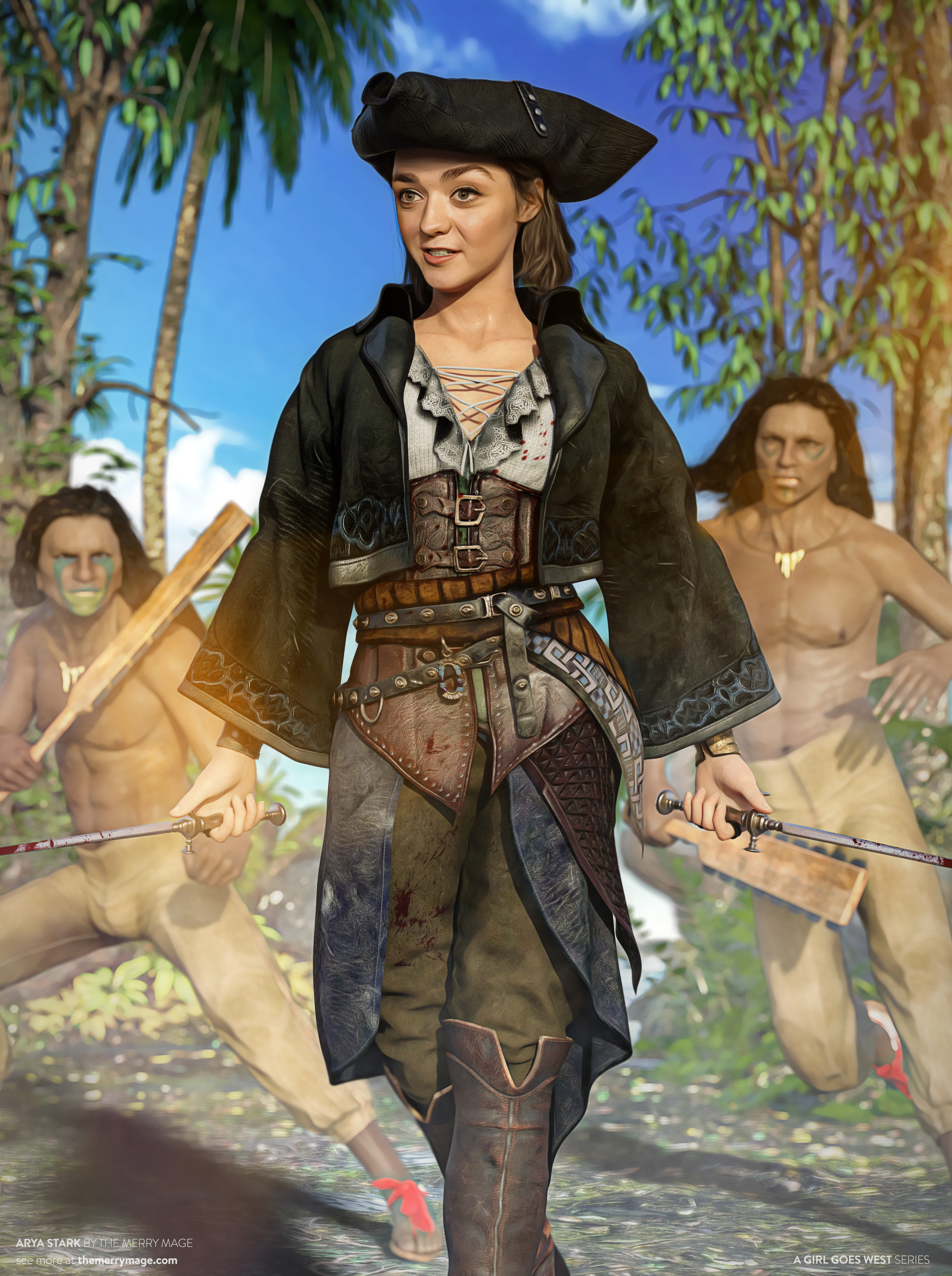 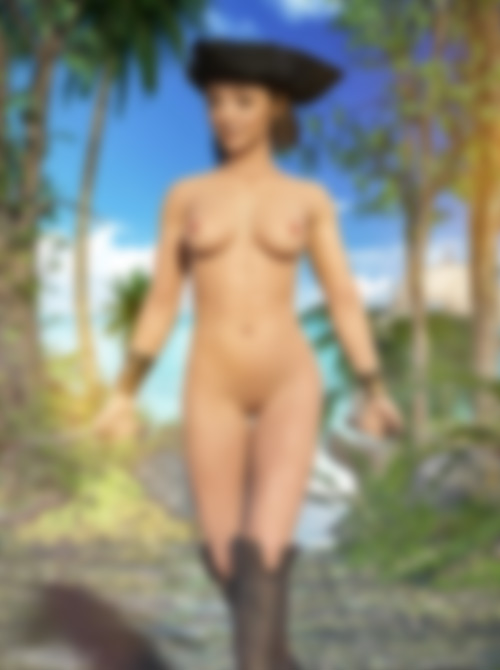 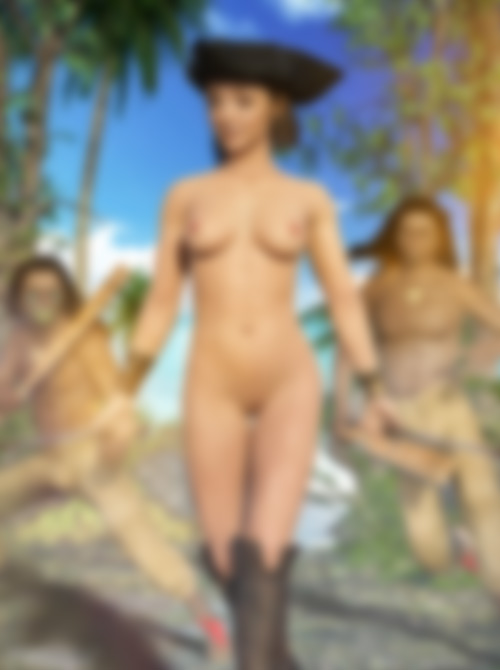 Arya soon realized she should not have left the beach.

Without the waters behind her, the remaining men quickly had her surrounded.

She ducked and spun, avoiding any direct hits from the blades of their maces.

But the sharpened stones tore at her clothing, and she felt cool air upon her breast.

Weakened from her own hunger, she slowed.

It wasn't long before the strongest of warriors knocked her down with the flat of his weapon.

Her head spun and she groped for her blade.

But he grabbed her from behind, barking commands at her in a foreign tongue.

Then she felt the cold hardness of his mace pressing on her breast, and in shock, saw his naked cock close enough to her face she could smell its stink.

In the distance, she heard cries as the last of her crew were slaughtered.

Tears came to her eyes as they stripped her.

The slavers had her captured and she was now utterly alone in this new land...

Slide the bar down to see Arya stripped naked by the slavers (if you don't see the slider module, just refresh the page) 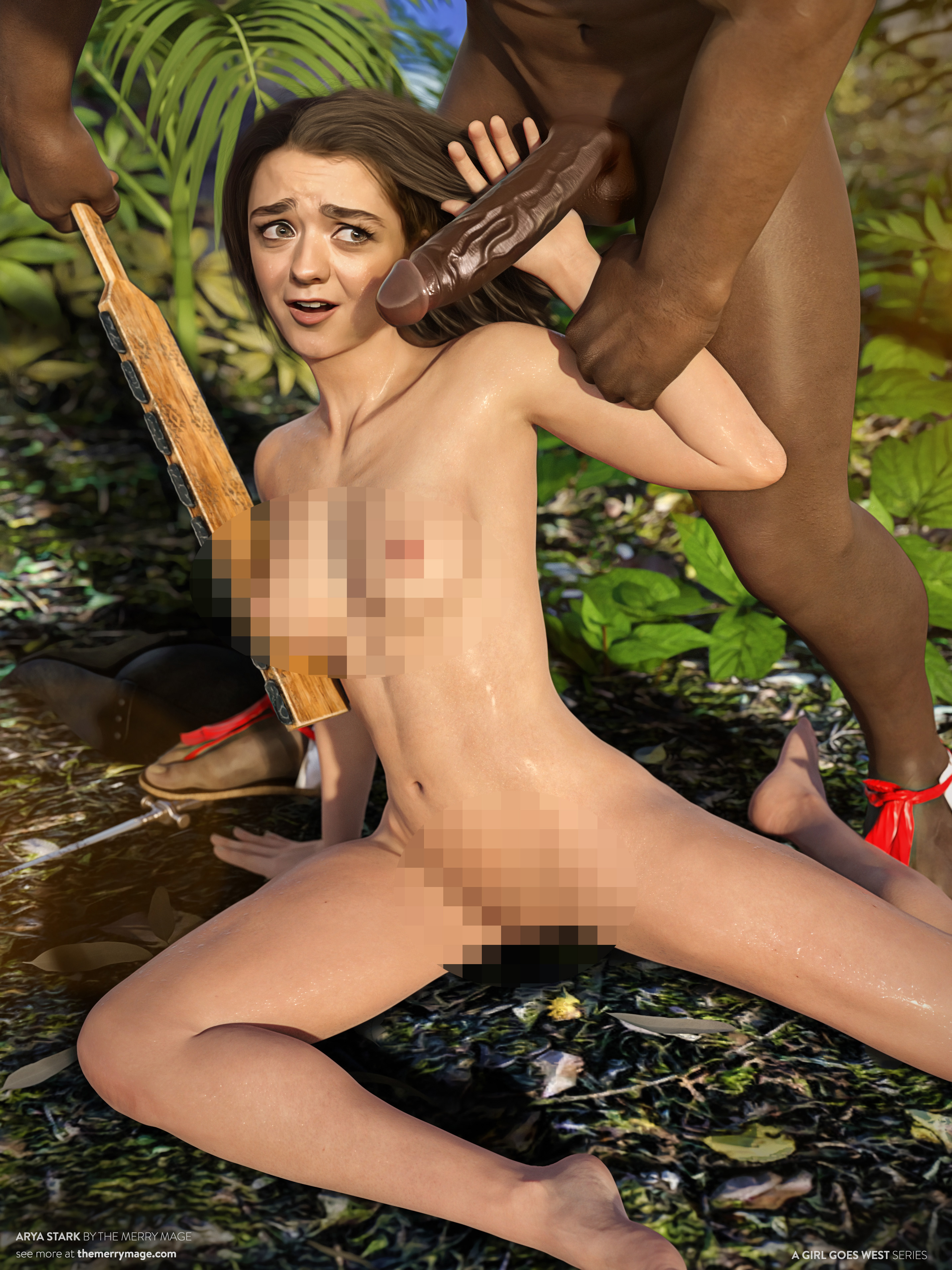 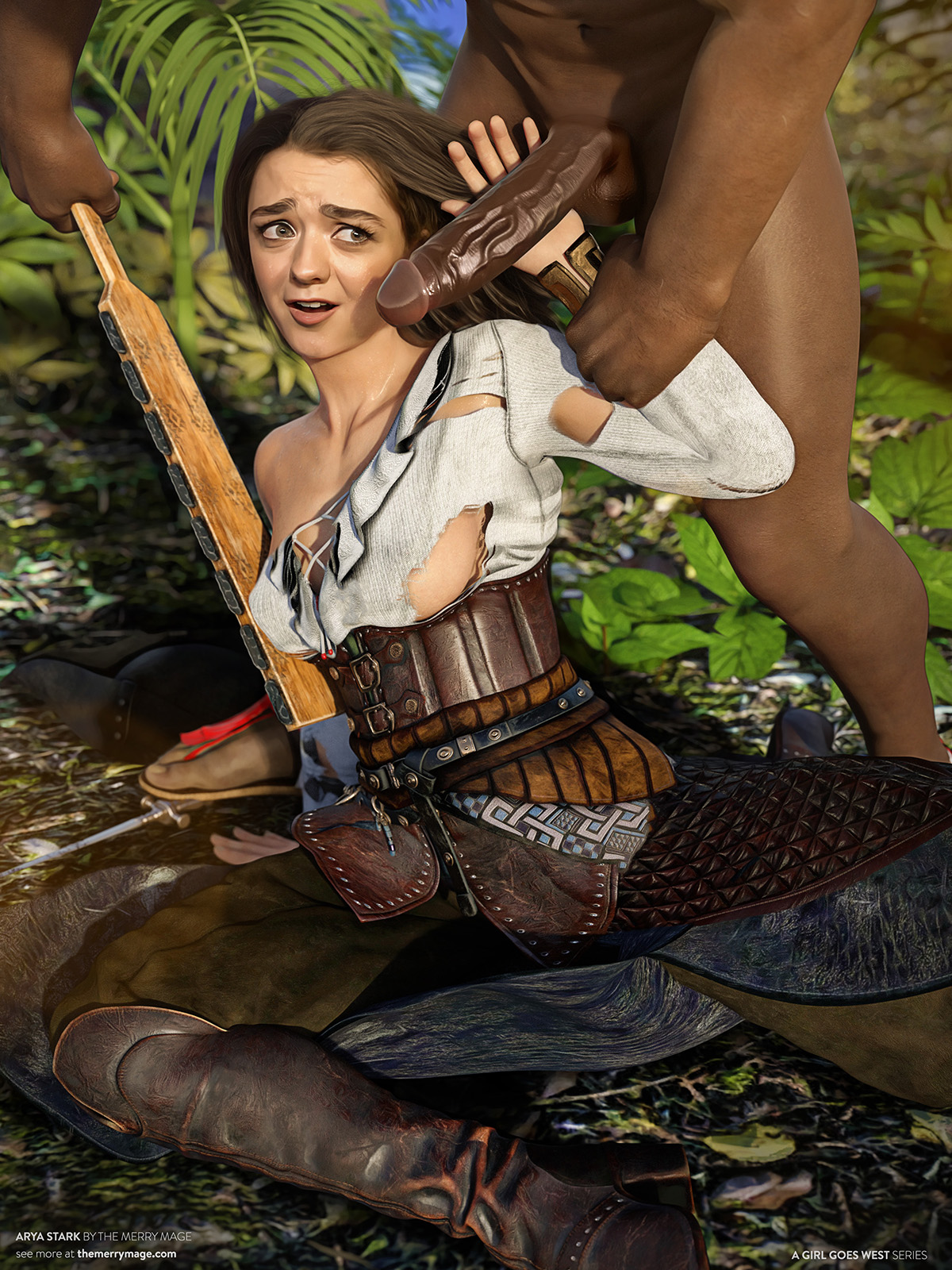 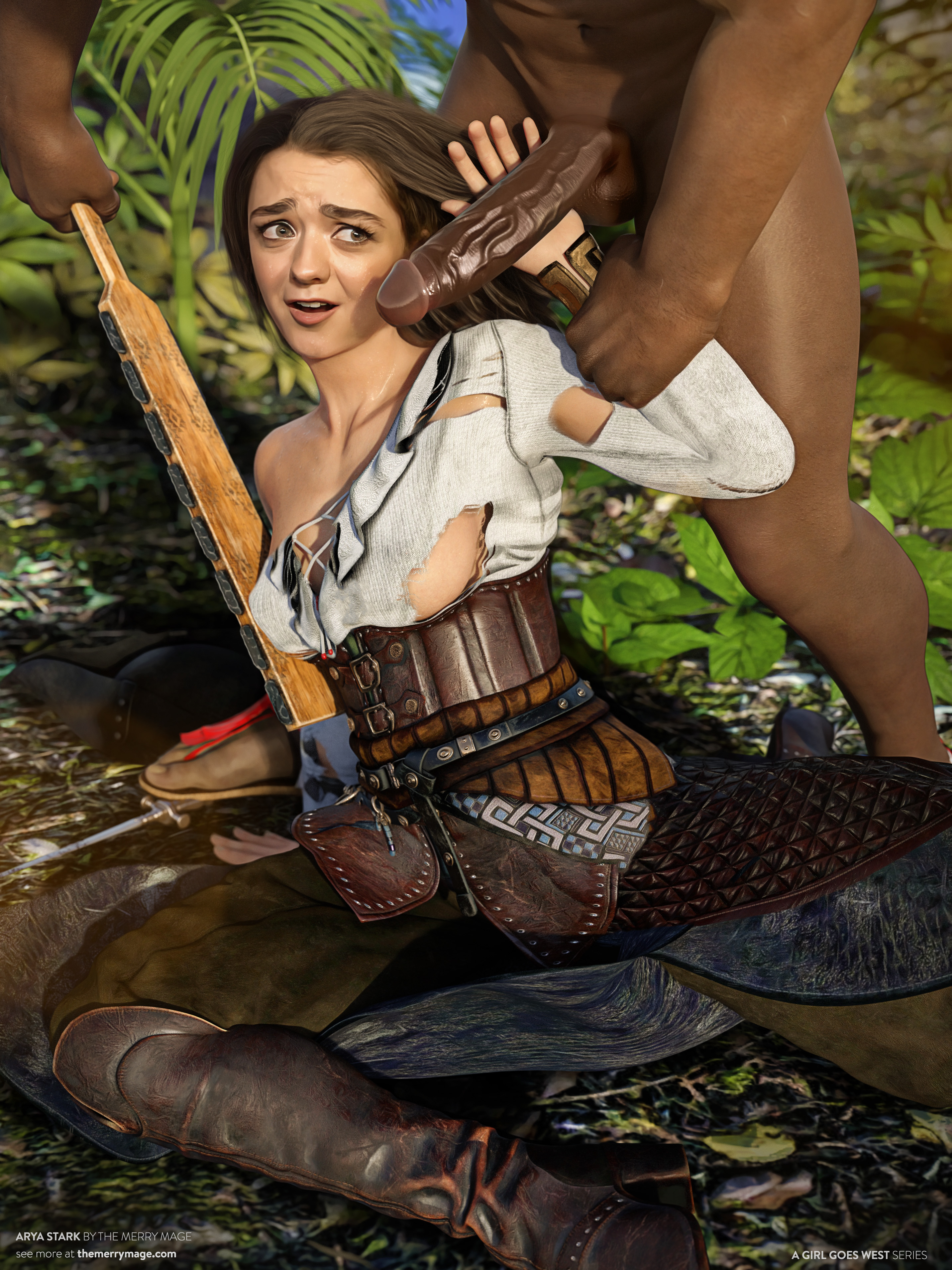 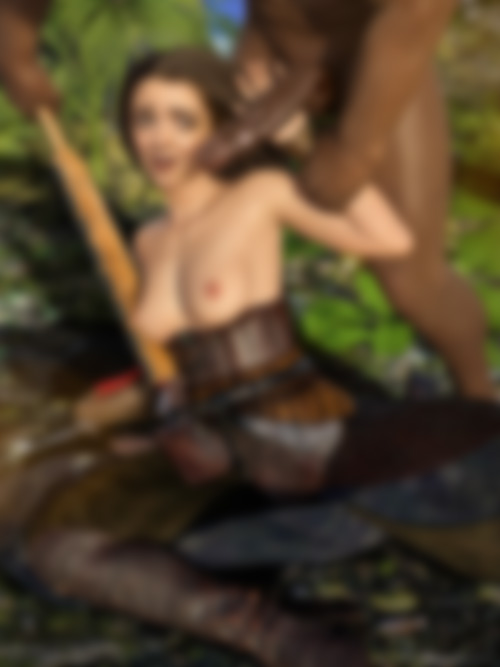 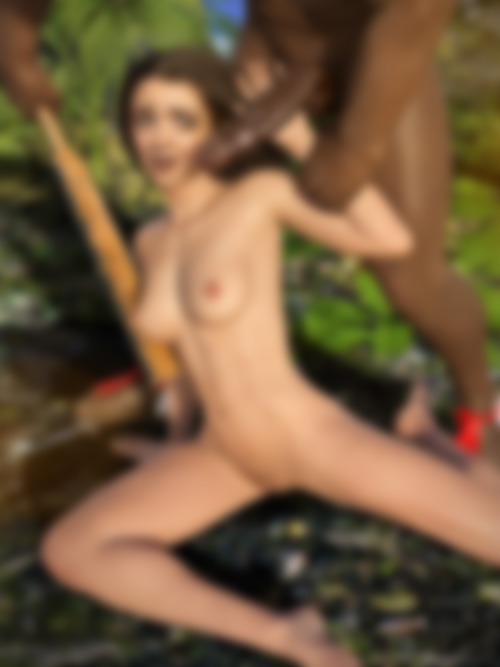 Scene 3: Tied Up and Sold on the Auction Block

A large cruel-looking man with a steel dagger shouted a command, and the warrior holding Arya reluctantly removed his cock.

With her hands tied behind her, she was forced to march inland until nightfall.

She awoke the next day in sprawling city of stone and jungle.

A mighty step pyramid loomed above, with small figures visible at the top of the steps.

For hours, the slavers sold their captives on a raised stone auction block.

But she and two twin girls were saved for last... the choicest of slaves.

Arya and the girls were stripped naked and bound tightly to wooden stakes.

Her firm young body glistened with sweat in the tropical sun.

A fat, bald man holding a whip, the king's Master of Delights, climbed up to inspect the girls.

Arya cursed at him as he freely groped her breasts.

He laughed and said in heavily accented common tongue:

"It is His Majesty's birthday tonight, girl, and he will enjoy you very much. I suggest you enjoy it as well, as it will be your last night. You and the twin girls will be sacrificed to Teoclotoco at first light."

He ran his hands down her body and spread her pussy lips with his fingers.

"Such a waste of a fine cunt if you ask me, but no fear," he chuckled, "I'll fuck you too myself, once His Majesty is finished with you."

With an effort, Arya closed her legs and was silent for a time.

Under her breath, she whispered two names:

"Master of Delights. and His Majesty the King...

Note: Videos are playable for members 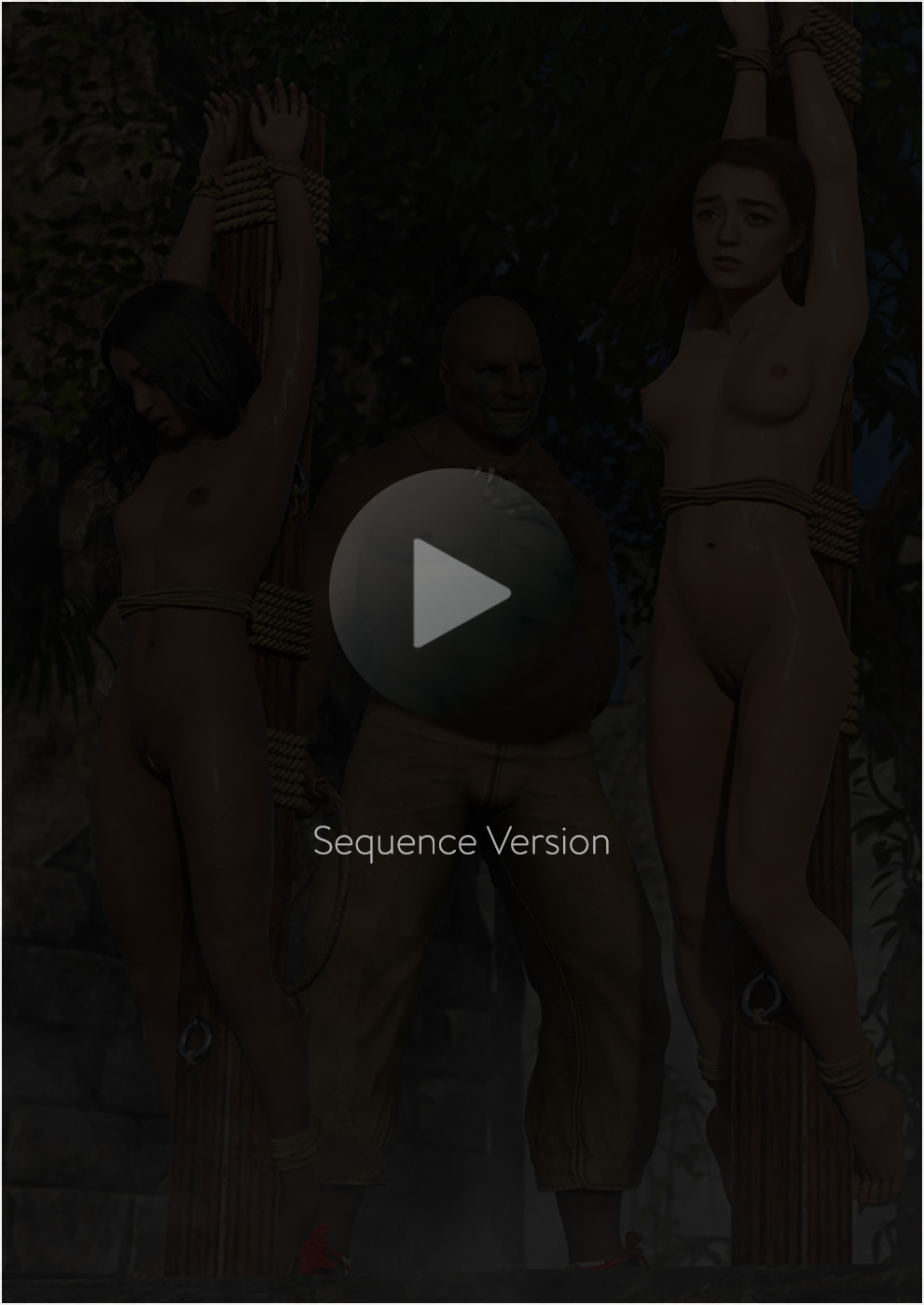 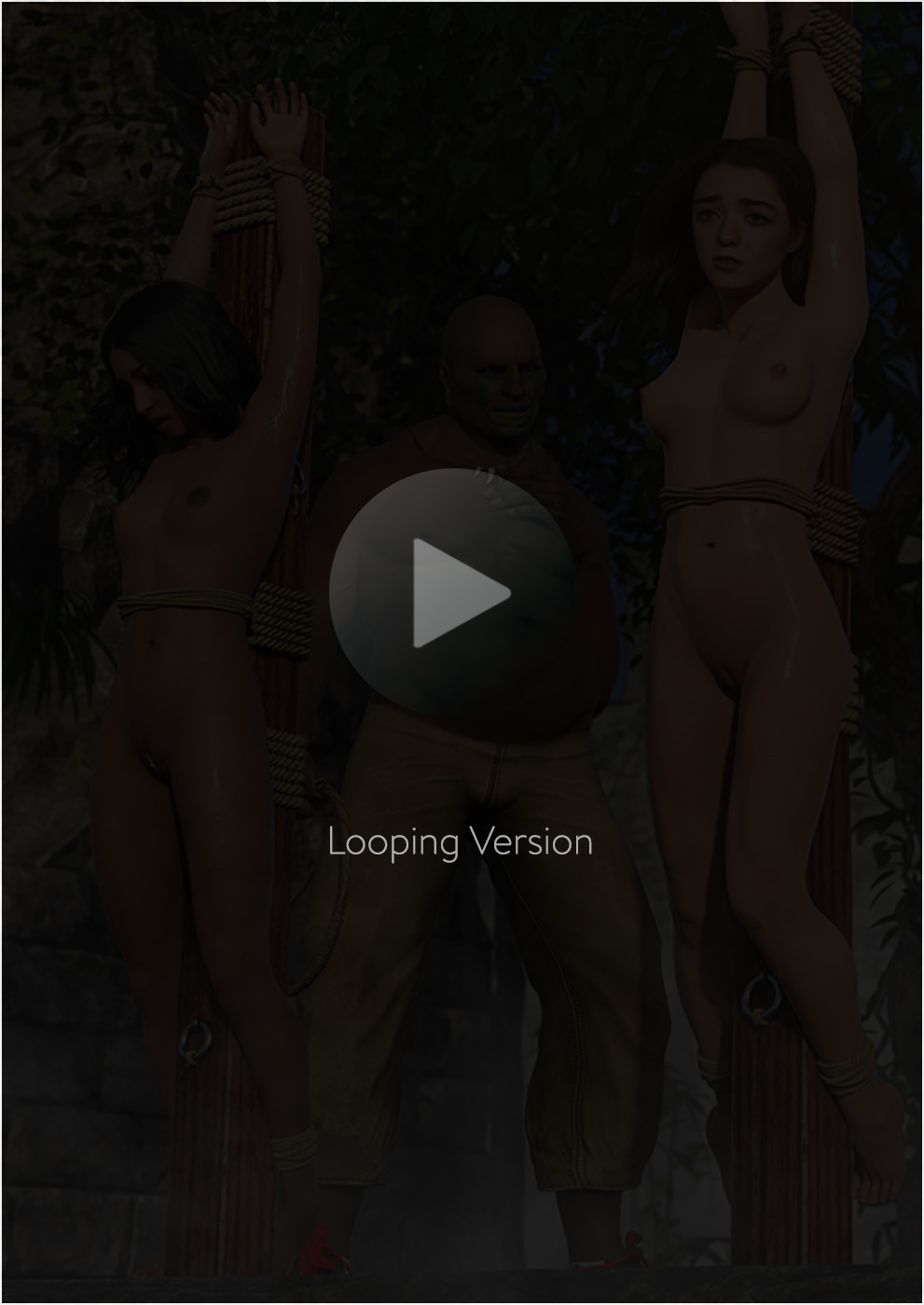 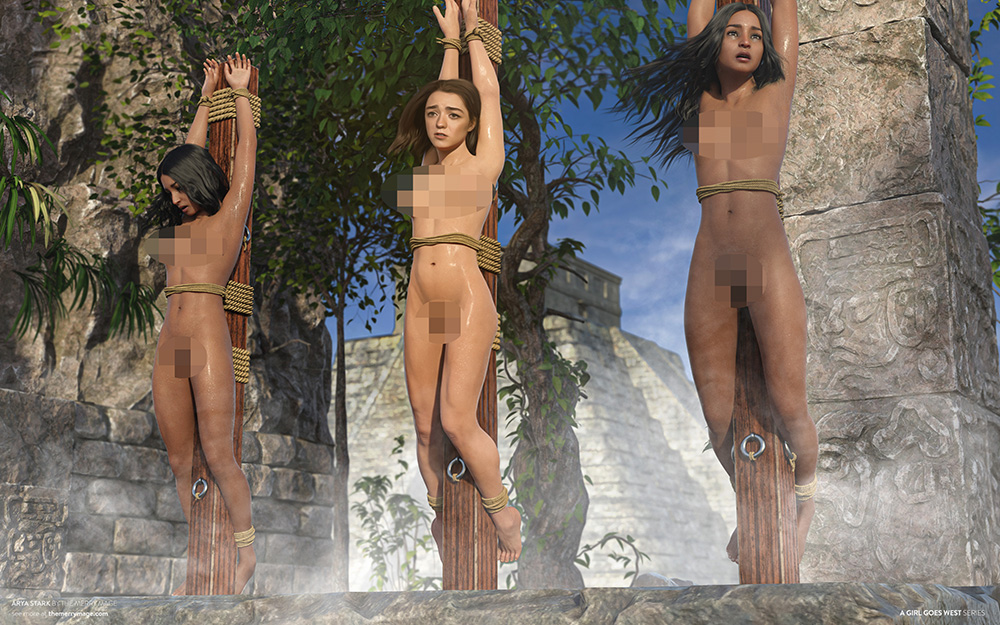 Arya & the twins for sale 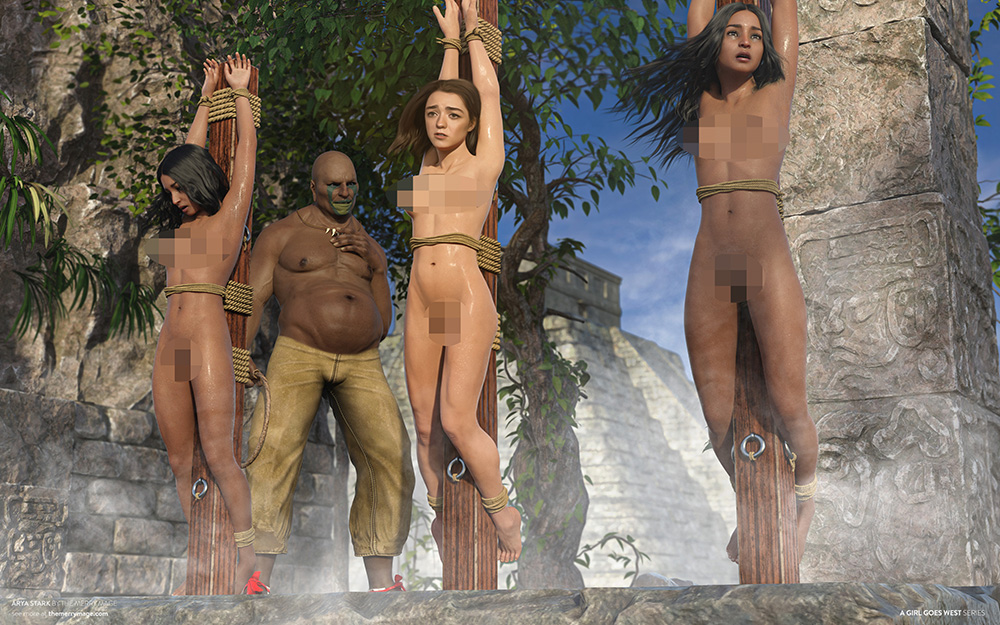 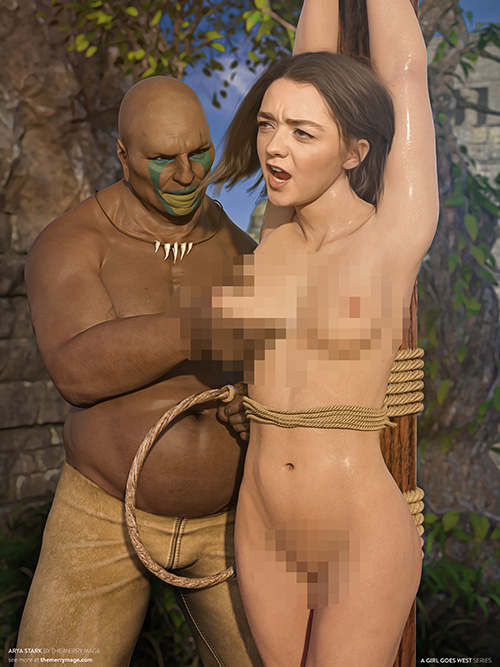 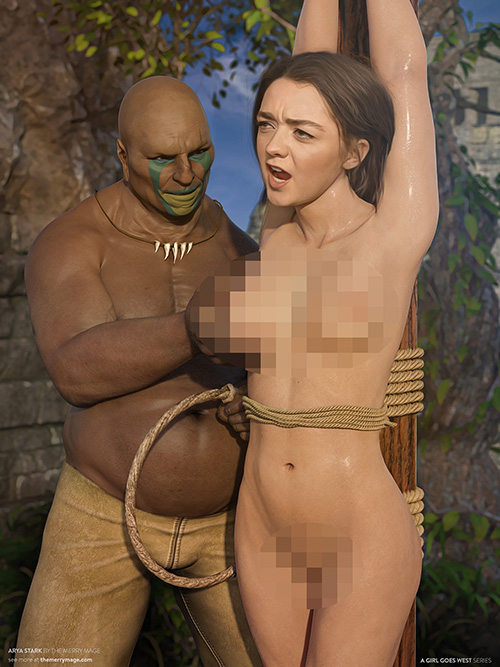 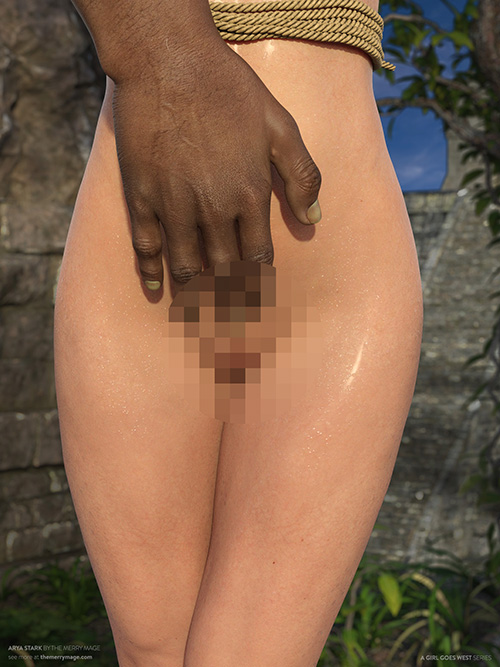 Scene 5: Crossing Off a Name

Scene 6: A Sacrifice of Blood 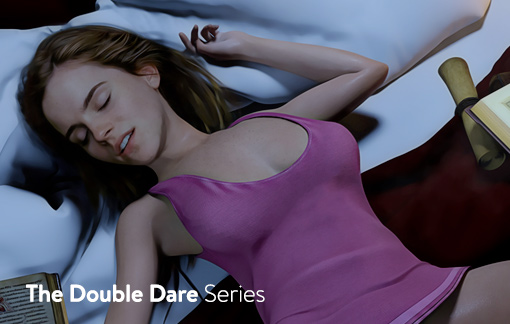 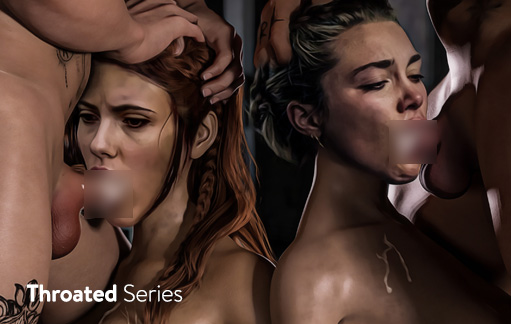 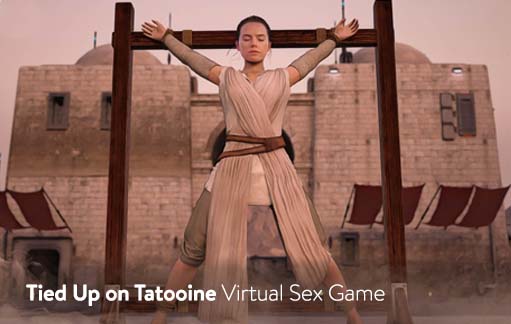